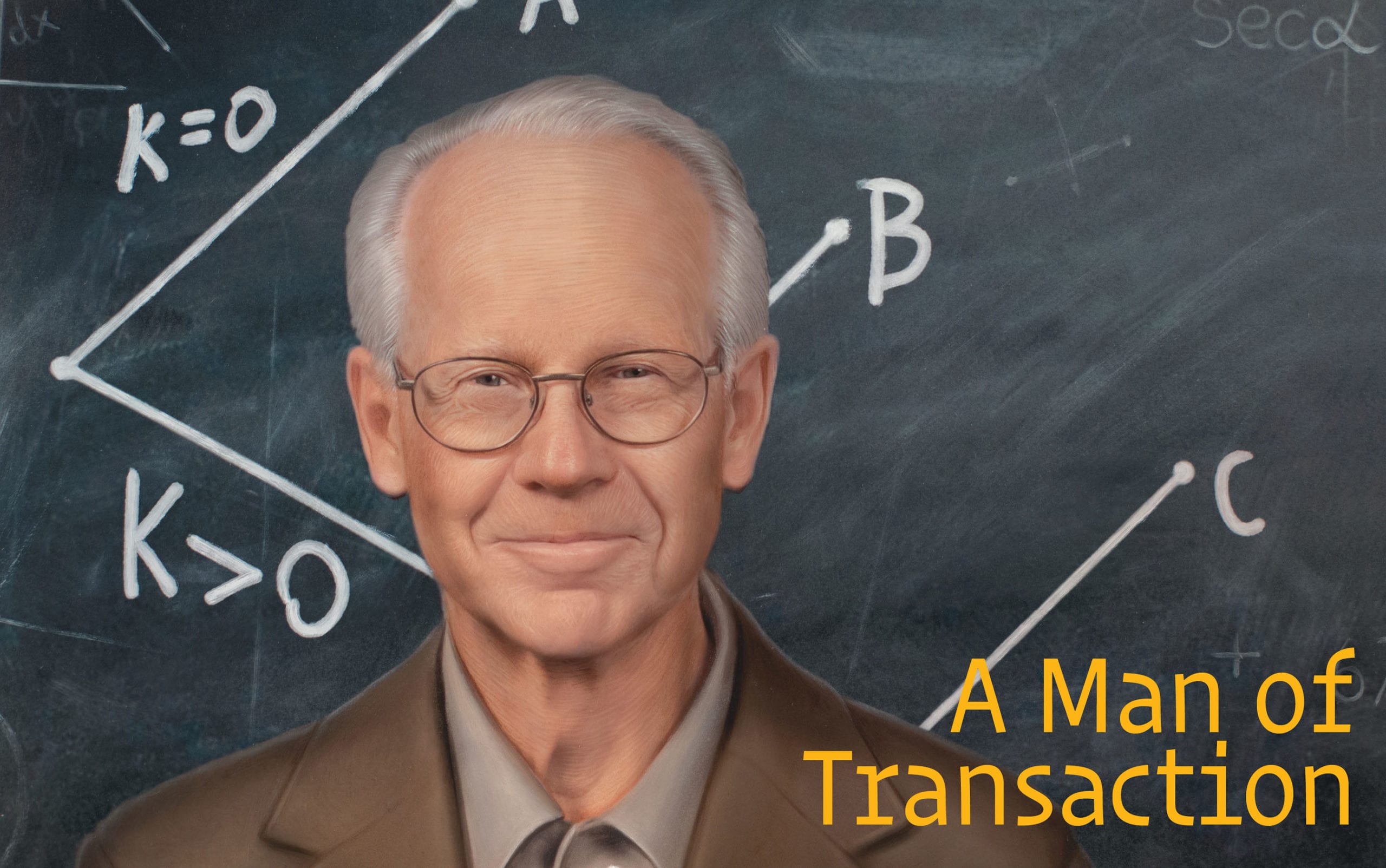 When John de Figueiredo, PhD 97, was a doctoral student at Berkeley Haas, he and some fellow students were interested in what was then a radical notion: looking beyond supply and demand to apply non-market forces to business strategy. “There were only a handful of us in the field, trying to take political and legal strategy and integrate it with competitive strategy,” he remembers.

Today, with social and environmental concerns joining profit as part of the triple bottom line, such ideas are hot topics in business. But back then, de Figueiredo and his fellow students were lucky to have found the guidance of broad-thinking Berkeley Haas Economics Professor Oliver Williamson, who offered them a framework through the field he had invented more than two decades earlier: transaction cost economics.

“It was so interdisciplinary, you could take elements of business strategy and apply it to political strategy and vice versa,” says de Figueiredo, now a professor of law, strategy, and economics at Duke University. “That was the genius of his theory—it was so powerful, it could be applied to all kinds of venues.”

Since Williamson passed away in May at the age of 87, tributes have poured in from across academia attesting to the power of his ideas, for which he won a Nobel Memorial Prize in Economic Sciences in 2009 (sharing it with Elinor Ostrom of Indiana University). What has been noteworthy about the posthumous praise is how much has come from disciplines outside of economics, demonstrating how Williamson’s theories have created a common language for understanding transactions and negotiations throughout the social sciences.

“Transaction cost economics was a big bridge between economics and many disciplines,” says Glenn Carroll, a former Haas professor who now teaches at Stanford.

At the heart of Williamson’s ideas is the “make-or-buy decision,” a way of analyzing whether a firm should contract out for parts or make them in-house. When components are complex or always changing, organizations can face problems in constantly renegotiating contracts—a transaction cost. That makes it more efficient to create those parts themselves, Williamson argued. “Suddenly we had a new lens through which to look at a fundamental issue in the theory of firms, such as why firms might vertically integrate,” says Haas Professor David Teece, the Thomas W. Tusher Professor in Global Business.

Teece was a graduate student at the University of Pennsylvania while Williamson was on the faculty and commented on early drafts of Williamson’s seminal 1975 work, Markets & Hierarchies—even proclaiming he would win a Nobel Prize for it. At the time, Williamson’s theories were radical within economics, which looked to the price system as the best way to organize and coordinate economic activity. “He had intellectual courage and insight and enticed me as a young scholar to do empirical research to test the validity of his theories,” says Teece, who wrote one of the first papers to show Williamson’s theories worked in an analysis of the auto industry. Soon after, Teece led the faculty in recruiting Williamson to Haas.

Haas Professor Steven Tadelis, the Sarin Chair in Leadership and Strategy, mostly ignored Williamson’s work while a graduate student at Harvard in the 1990s, because it wasn’t as heavily mathematically based as the economic theory of the time. Five years later, while a young professor at Stanford, he was working on a project to gauge the trade-offs between fixed-price and cost-plus contracts, which pay a contractor an additional payment to allow for a profit. He argued that complex projects were best administered through cost-plus contracts even though they lacked incentives to reduce costs. A colleague suggested he examine Williamson’s ideas. “I went back to his book and realized, ‘Oh my God, it’s 90% here!’” he recalls.

The paper Tadelis wrote on the topic is now his most widely cited. When he afterwards presented it at Berkeley, he says, Williamson was generous with his time and feedback, starting a conversation that eventually led to the two of them co-writing a chapter on transaction cost economics for The Handbook of Organizational Economics.

Many of Williamson’s ideas have gone beyond business and economics to apply to politics and law. “Frequent transactions, agreements, and collective decisions are fundamental to politics,” says Haas Political Economics Professor Ernesto Dal Bó, the Phillips Girgich Professor of Business. “Oliver’s ideas have really permeated the way we think about problems in ways that are now part of our mental and conceptual grammar.”

In his own work, says Dal Bó, he recently used a version of transaction cost economics to analyze politics in Sweden. “A politician makes promises to represent you; you vote for her if you believe she won’t later renege on that promise,” he says. “This involves a political transaction cost.” In cases in which voters don’t trust politicians to keep their promises, they might vote for politicians who more closely resemble themselves demographically, a phenomenon Dal Bó compares to vertical integration by firms. Dal Bó and co-authors recently applied these ideas to explain the rise of the right-wing populist party in Sweden, winning them the Williamson Award from the Society for Institutional & Organizational Economics (SIOE) last year.

Beyond subject matter, many of Williamson’s students cite his teaching style—which emphasized the importance of being modest, slow, molecular, and definitive in research—with giving them the tools to succeed in their fields—sometimes in opposition to prevailing currents.

“He would get back to you within a couple of days, clearly having read every word of your paper,” says Jackson Nickerson, MBA 90, PhD 97. And yet his comments could be enigmatic, only revealing their import when students dug deeper into their research. “He didn’t say, ‘do this, do that,’ which might have been maddeningly frustrating, but it really caused one to think and figure things out for yourself.”

Williamson sometimes imparted lessons in other ways as well, as de Figueiredo discovered one summer when he house-sat for Williamson in his home in the Berkeley Hills, overlooking the Golden Gate Bridge. Williamson made him sign a short contract which, among other points, included the stipulation “no parties,” de Figueiredo recently said in a tribute at SIOE’s annual conference.

It dawned on him at that moment what incomplete contracting and leverage really meant. “I held the house, but he held my future—my PhD degree,” he says. Looking back on the incident now, he says, Williamson taught him more than not to throw a party in his home. “A contract supported by long-term relationships with frequent exchange would survive all types of potential contractual hazards,” he says, adding that his relationship with Williamson lasted three decades. “Quite simply, Oliver didn’t only theorize about the relational contract, he also practiced it.”

Professor Emeritus Oliver Williamson, a UC Berkeley and Haas School of Business professor for nearly three decades, died on May 21 in Oakland, Calif., following a period of failing health. He was 87.

Williamson—known as “Olly” to his friends, colleagues, and students—was born in Superior, Wisconsin, in 1932 to two teachers. He earned a bachelor’s in management from the Massachusetts Institute of Technology in 1955, an MBA from Stanford University in 1960, and a PhD from Carnegie Mellon University in 1963.

He began teaching as an assistant professor of economics at Be rkeley. In 1965, he moved to the University of Pennsylvania, then joined the faculty at Yale University in 1983.

In 1988, Williamson returned to Berkeley with appointments in business and law as well as economics. While at Berkeley, he created a world-renowned PhD workshop known today as the Williamson Seminar on Institutional Analysis. He retired from teaching in 2004.

Williamson, the Edgar F. Kaiser Professor Emeritus of Business at Haas, won the Nobel Memorial Prize in Economic Sciences in 2009 for his insights into the process by which businesses choose whether to outsource a process, service, or manufacturing function or to perform the work in-house.

His multidisciplinary approach to analyzing organizational structures was unconventional in economics at the time—he described it as a melding of soft social science with abstract economic theory—and laid the foundation for the now-burgeoning fields of organizational and institutional economics. His theories shaped fields as diverse as public policy, law, strategy, and sociology, and his influence can be seen worldwide, from electricity deregulation in California to investment in Eastern Europe to human resource management in the technology industry.

Two of Williamson’s five books, Markets and Hierarchies: Analysis and Antitrust Implications (1975) and The Economic Institutions of Capitalism: Firms, Markets, Relational Contracting (1985) are among the most cited in the social sciences.

“Williamson’s work permanently changed how economists view organizations,” says Prof. Rich Lyons, BS 82, who was dean of the Haas School when Williamson won the Nobel. “Yet for all of his intellectual creativity, I most often think of Olly as a person who lifted others. The ripple effect that he has had on his field through his students and colleagues could well be as large as the enormous impact his own work had.”

Williamson donated a large portion of his Nobel Prize to Berkeley Haas to create the endowed Oliver E. and Dolores W. Williamson Chair of the Economics of Organizations, currently held by Prof. John Morgan.

Surviving Williamson are his five children, five grandchildren, a niece, and a nephew. He was predeceased by his wife of 55 years, Dolores Celeni Williamson, in 2012.

Prof. Ernesto Dal Bó calls Williamson’s work “a fountain of vocation-shaping epiphanies.” Says Dal Bó: “We could no longer think of markets, organizations, and legal or political institutions in the same way.”