The price we pay for job stress Just how bad can stress be for your health? If you’re a CEO, it can literally take years off your life, says new research by Ulrike Malmendier, Berkeley Haas’ Edward J. and Mollie Arnold Professor of Finance.

Malmendier and fellow researchers (including Marius Guenzel, MS 17, PhD 21) examined anti-takeover laws going back to the mid-1980s, then correlated the dates of their enactment with the lifespans of some 1,600 CEOs serving at large, publicly listed U.S. firms between 1970 and 1991. They also tracked CEOs affected by industry turmoil, like the financial crisis of 2007–08.

Regardless of the source of the stress, CEOs in high-pressure jobs visibly aged faster and died about two years earlier than those in lower-stress roles. “You might think that’s not a lot,” Malmendier says, “but actually it’s huge. It’s comparable to having been born decades later or to a significant health hazard, such as smoking for years of your life.”

Malmendier hopes that the study can lead to further research looking at the impact of workplace stress on health and life expectancy and what can be done to mitigate it. “It’s  easier to look at this with CEOs, but I would worry even more about people at the bottom of an organization in dealing with stress and financial constraints,” Malmendier says.

Some states have laws protecting firms from hostile takeovers, which no doubt let CEOs sleep easier at night. The researchers examined such laws going back to the mid-1980s. 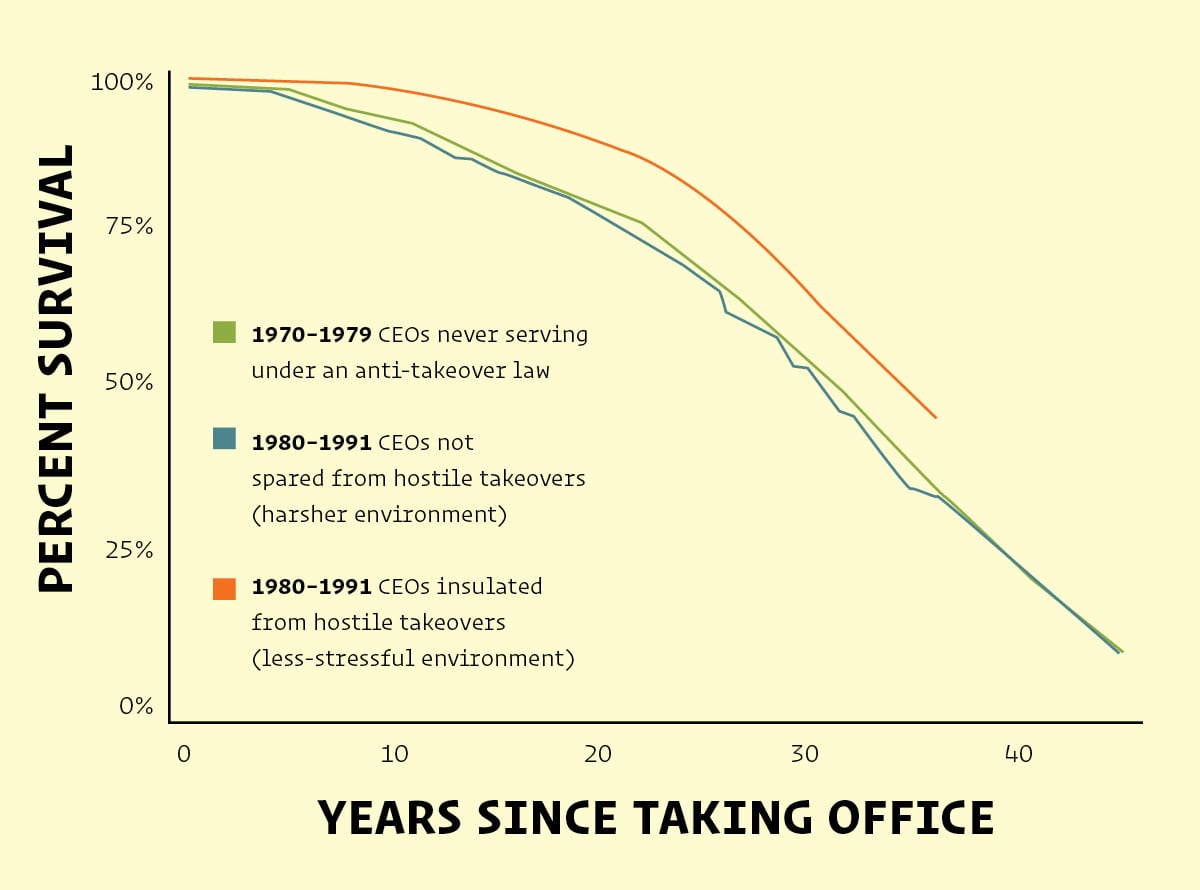 CEOs not insulated from hostile takeovers were 28% more likely to die within five years of leaving their positions.

Researchers ran 3,000+ photos of 466 recent CEOs through facial recognition software and used machine learning to judge their relative ages before and after the financial crisis of 2007–08. The result? The CEOs appeared to age faster by more than a year, on average, after having gone through the crisis. Some CEOs, as shown here, appeared even older. Periods of heightened job demands can shorten the lifespans of CEOs and visibly age them faster than normal.

Job stress has real impacts on health and life expectancy that are too often overlooked.