Assoc. Prof. Panos Patatoukas has helped students find unexpected career paths in finance, launch companies, and open their eyes to the “intrigue, mischief, and opportunity boiling just below the surface of financial statements.”

For Patatoukas, it’s all in the service a larger purpose: democratizing access to financial information in the interest of a more equal society.

His passion, dedication, and instructional inventiveness have now earned Patatoukas UC Berkeley’s highest teaching honor. He is one of four professors across campus to receive a 2018 Distinguished Teaching Award, to be bestowed at a ceremony April 18. “This is a very significant event for me, and I feel very honored,” says Patatoukas, who joined the Haas Accounting Group eight years ago just after earning his PhD from Yale University. “My mom did not get to come to any of my graduations, but I’m bringing her over from Greece for this one.”

The award is given annually to recognize sustained excellence in teaching that “incites intellectual curiosity in students, engages them thoroughly in the enterprise of learning, and has a lifelong impact.”

Patatoukas teaches interdisciplinary capital markets courses to students in the Berkeley Haas PhD and Evening & Weekend MBA programs, including the elective Financial Information Analysis, which has become one of the most in-demand courses in the program since he took it over. Far from dry number crunching, the class wins high praise from students who come in with a wide range of financial literacy—from investment bankers to computer science or humanities majors.

“Panos has a particular genius for teaching financial information analysis to those of us unaccustomed to finance,” wrote Walker Frost, EWMBA 16, an undergraduate philosophy major who now manages finances for a 50-person company. “Panos is so successful because his goal is not just to teach finance—it is to use financial analysis tools to teach us about things we already intuit but can’t yet explain.”

Talent for teaching all levels

Patatoukas’ work spans all academic levels. He serves as PhD field advisor for the accounting group, overseeing student recruiting, curriculum, and comprehensive exams while also teaching seminars and participating in dissertation committees. He also serves as faculty director of Berkeley Executive Education’s Financial Analysis for Leaders program, which he completely overhauled; he mentors undergraduate Regent Fellows; and he has introduced high school students to the idea of saving and compounding through the Berkeley Business Academy for Youth.

“The driving force of my teaching is to mitigate the problem of access inequality to financial information, to promote individual investor protection, and improve the allocation of capital in society,” he wrote in his teaching reflection for the award. “My goal is to democratize the power of financial analysis, and to bring this power to our students across various programs at UC Berkeley.”

A native of Greece, Patatoukas was valedictorian at Athens University of Business and Economics, where he earned his bachelor’s in accounting and finance. He went on to earn a master’s at the London School of Economics before moving to the US to attend Yale. His research focuses on corporate valuation and financial statement analysis; the properties of financial accounting data and reporting practices; cross-industry economic links and value creation along the supply chain; and forecasting, “nowcasting,” and measuring economic activity using financial accounting data. 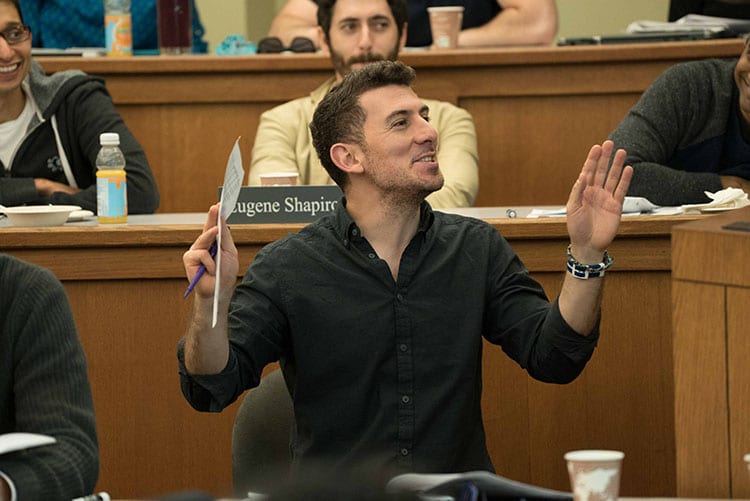 In his teaching, Patatoukas draws widely from accounting, finance, economics, and operations management, writing many of his own real-life, real-time cases and adeptly translating theory to practice. Teaching does not compete with his research, but rather his research informs his teaching and rewards him with new ideas—a few of which have grown into research papers, wrote Assoc. Dean Candi Yano and Sr. Asst. Dean Jay Stowsky in their nomination.

“I wish I had the opportunity to be a student at Berkeley, even though I do feel like a student of my students,” Patatoukas said. “I learn every day from them.”

One former MBA student wrote that with four years of experience investment banking, she had been initially skeptical that she would learn anything from an MBA course in financial information analysis. But from the very first day, she was hooked. She came away from the course with insights that have benefited her career but also impacted how she evaluates her personal financial decisions.

Students also praised Patatoukas for helping them develop in new careers. Patrick Rivers, EWMBA 16, said he took the course soon after​ switching tracks from 10 years as a research scientist to a​ dream job at a hedge fund, evaluating biotechnology investments. He said the course not only gave him a concrete way to evaluate investment opportunities and practical skills that made him “100% better” at his job, but he became genuinely excited about the world of finance.

“There was an entire world of intrigue, mischief, and opportunity boiling just below the surface of these financial statements, and I wanted to be as immersed as possible in that financial milieu. Panos made this a living, breathing landscape and not just a bunch of numbers on a page,” he wrote in his recommendation letter.

Last fall, Patatoukas also took on the mentoring of three undergraduate Regent Fellows, including freshman David Lu, who wrote that he had felt overwhelmed and uncertain after changing his life-long dream of becoming a doctor and deciding to pursue business. Patatoukas is “the most approachable, kindhearted, charismatic and welcoming professor I have ever met,” and has been patient in describing career paths in business and the fundamentals of investing as well as the broader social implications of his work, he said.

“His goal of democratizing the power of financial information analysis and giving power to all people truly embodies the defining principles of Berkeley Haas,” Lu wrote. “He has proven to me, through his actions, that it is possible to have such altruistic and benevolent goals in the business field.”

Prof. Sunil Dutta, the Joan & Egon von Kaschnitz Distinguished Professor of Accounting and International Business and former chair of the accounting group, attributes Patatoukas’ exceptional teaching skills to his passion for his students and for his research, his ability to translate academic material to non-specialists, and his constant focus on improvement. “He studies each student’s feedback after the course and makes all the necessary changes to the content and teaching material based on this feedback. He is not satisfied even if there is a single student who has difficulty in following the material.”

The award comes on top of several other recognitions for Patatoukas’ teaching and research. He is a three-time winner of Berkeley Haas’ highest teaching honor, the Earl F. Cheit Award; he also won the school’s Schwabacher Award for Distinction in Teaching and Research and was the recipient of the 2017 AAA/AICPA Notable Contributions to Accounting Literature Award. He was also selected by Poets & Quants among the “2015 Best 40 Under 40 Professors“; by the San Francisco Business Times as part of the “40 under 40 Class of 2017,” and as a “Top 10 Business School Professor Under 40 by Fortune.

Past Berkeley Haas faculty winners of the Distinguished Teaching Award include: